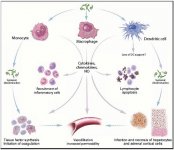 ​
Model of filovirus pathogenesis in primates
Monocytes, tissue macrophages, and dendritic cells appear to be early and preferred sites of filovirus replication. Soluble factors released from virus-i nfected mononuclear cells act locally and systemically. Release of chemokines from these virus-infected cells recruits additional monocytes and macrophages to sites of infection, making more target cells available for viral exploitation and further amplifying an already dysregulated host response. In addition, these soluble factors contribute to the impairment of the vascular system. Although filoviruses do not productively infect lymphocytes, the rapid loss of lymphocytes by the process of apoptosis is a noted feature of disease. This lymphocyte loss is probably due to a combination of factors including virus-induced impairment of dendritic cell function, release of proapoptotic soluble factors from virus-infected monocytes and macrophages, and possibly direct interaction between viral antigens and lymphocytes. Coagulation abnormalities are consistent features of filovirus disease and are caused by a number of factors, particularly during the later stages of disease; recent data strongly implicate a role for tissue factor. The hemodynamic and coagulation disorders are exacerbated by infection of hepatocytes and adrenal cortical cells, resulting in impairment in the synthesis of important clotting factors. At the same time, impaired secretion of steroid-synthesizing enzymes by virus-infected adrenal cortical cel ls leads to hypotension. DC, dendritic cell; NO, nitric oxide. (Adapted from a prior publication by Bray M, Geisbert TW. Ebola virus: the role of macrophages and dendritic cells in the pathogenesis of Ebola hemorrhagic fever. Int J Biochem Cell Biol 2005;37:1 560-1 566​