Just Keep falling in Love with Virology every Day An icosahedron has 20 equilateral triangles arranged around the face of a sphere. It is defined by having 2, 3 and 5 fold axis of symmetry​


The illness that has sickened nearly 125 people in Guinea, 78 of whom have died, has been confirmed as the Ebola Virus. This is the first known outbreak of the Ebola virus in Western Africa, and health officials are frantically trying to contain the spread of this deadly infectious disease
From January until March 31st, there have been 122 suspected cases of Ebola Virus in Guinea. A total of 78 people have died thus far. Most of the cases had originally been reported in the southern portion of this African country, but the disease is spreading
Despite trying to contain the virus, it has now spread to Guinea’s capital and beyond it’s borders, making this particular epidemic unprecedented. Deaths in Sierra Leone and Liberia have been attributed to the Ebola Virus. Previous outbreaks have been much more geographically contained and the remained in more remote locations
Unfortunately, several of the deaths so far have been children, and quite a few health care workers treating sick patients have also succumbed to the disease
The Ebola Virus is rare, but it causes panic since there is no treatment and it is fatal in around 90% of cases. The virus causes a hemorrhagic fever resembling septic shock. It was first report in the Democratic Republic of Congo in 1976. Mortality rates are as high as 90%
One of the great mysteries of the Ebola Virus is their natural reservoir (where the virus resides) and what the mode of transmission is between this reservoir and humans. Bats have long been suspected of harboring the virus
Transmission of the virus can be from exposure to infected bat secretions or excretions, and from one person to another. Person to person transmission occurs from exposure to infected secretions including blood, urine, vomit, feces and even sweat
Once infected by the virus, there is extensive tissue damage and necrosis at the point of infection. The virus also induces a systemic, or full body inflammatory response, which resembles that seen in septic shock-an overwhelming systemic bacterial infection
But it seems that the way these viruses cause such a severe and often-fatal infection is because they impair the bodies natural immune response system. The body therefore becomes unable to fight off the infection
Patients infected with the Ebola virus typically present with the sudden onset of fevers, chills and malaise. Other symptoms include severe headache, muscle pain, nausea, vomiting, diarrhea and abdominal pain. A productive cough and sore throat is not uncommon
Over several days symptoms progress to include stupor, hypotension and prostration. As noted earlier, mortality is as high as 90%
The Ebola Virus can be detected by specific blood tests. However, once diagnosed, there is no treatment for this frightening illness. Medical care teams can offer only supportive care and attempt to prevent further spread of the virus
At the time this article was published, cases of Ebola virus were discovered in neighboring Liberia and Sierra Leone, where five deaths have since occurred. Additionally, a Canadian man who had recently returned from Liberia was quite ill with suspicious symptoms but thankfully, test results have been negative for the Ebola Virus. This is certainly good news, but doesn’t negate the real possibility that the virus could spread to other continents such as North America​


Principles of Molecular Virology
By Alan Cann​
The fifth edition of the highly successful Principles of Molecular Virology takes on a molecular approach to the explanation of virology, presenting basic in a clear, concise and student-friendly manner. This fully updated undergraduate text explores and explains the fundamental aspects of virology, including structure of virus particles and genome, replication, gene expression, infection, pathogenesis and subviral agents​ Fields Virology is the authoritative reference book for virology, providing definitive coverage of all aspects of virology, including thorough coverage of virus biology as well as replication and medical aspects of specific virus families. With the regular outbreaks of influenza, noroviruses as well as other emerging and re-emerging viruses it is essential to have the most up-to-date information available​ 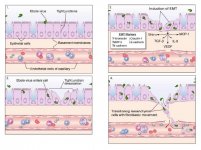 ​
Potential Roles for TGF-β Signaling and Mesenchymal Cell Marker Expression
Modulation During EBOV Infection.​
The proposed model of EBOV-mediated TGF-β
activation and modulation of mesenchymal-like cell marker expression occurs over four stages:1) Ebola virus infects epithelial cells; 2) Following infection, there is dissociation of cell-to-cell contacts; 3) Infected cells release various cytokines and chemokines that can have autocrine or paracrine effects with concomitant modulation of expression of mesenchymal cell marker from epithelial-like to mesenchymal-like; 4) Loss of epithelial cell integrity, increased motility of infected mesenchymal-like cells and release of cytokines and chemokines with downstream effects on the surrounding vasculature (i.e. disruption of adherens junctions and down-regulation of VE-cadherin) are contributing factors to EBOV pathogenesis.​
​
adapted from J Virol June 2014​


(!On the occasion of World AIDS Day (However, one day delay​
:riz304::auizz3ffy9vla57584xDedicated to all those interested in immunovirology science