این هم در مورد تخم گذاری و نگهداری که پرسیده بودید ...
These contain arteries and are thought to increase the surface for the purpose of
absorbing oxygen (comparably to external gills of the aquatic stage), which is useful as the male stays with his eggs for an extended period of time after they have been laid in the water by the female. 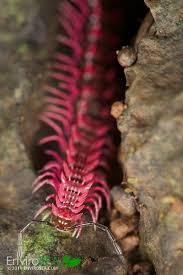 
The shocking pink dragon millipede (Desmoxytes purpurosea) is a spiny and toxic millipede named for its vivid pink color. It was formally described in 2007 from a specimen collected at the Hup Pa Tard limestone cavern in Thailand, within the Greater Mekong.[1] The largest species of its genus, the adult millipede is approximately 3 cm (1.2 in) long. It lives in the open on leaf litter. It becomes gregarious after rain showers. The millipede has glands that produce hydrogen cyanide to protect it from predators,[2] a fact advertised by its aposematic color. Because it produces cyanide, it smells like almonds.[1]

The shocking pink dragon millipede was named third in the top ten new species list of 2008 by the International Institute for Species Exploration.[3]

Other species of genus Desmoxytes can be brightly colored, sometimes in shades of red, as in Desmoxytes rubra
م

[Herpetology • 2014] Taxonomic Status and Redescription of Flectonotus ulei (Anura: Hemiphractidae), with A Key for the Species of Fritziana Based on preserved specimens from the states of São Paulo and Rio de Janeiro, Flectonotus ulei Miranda-Ribeiro, 1926 is resurrected from its synonymy with Flectonotus fissilis (Miranda-Ribeiro, 1920) and is redescribed. Analysis of osteological characters and brood pouch structure confirms that F. ulei belongs to Fritziana. The species is small for the genus (snout-vent length in males, 19.2-26.9 mm, n = 2; in females, 20.3-21 mm, n = 4) and was found in bromeliads. Flectonotus ulei is characterized by dorsal pattern consisting of interorbital pentagon or hexagon-shaped mark delimited by heavy dark line, diameter of tympanum smaller than that of disc of third digit, and a brood pouch covering the eggs dorsally except for a narrow longitudinal slit; eggs arranged in rosette. 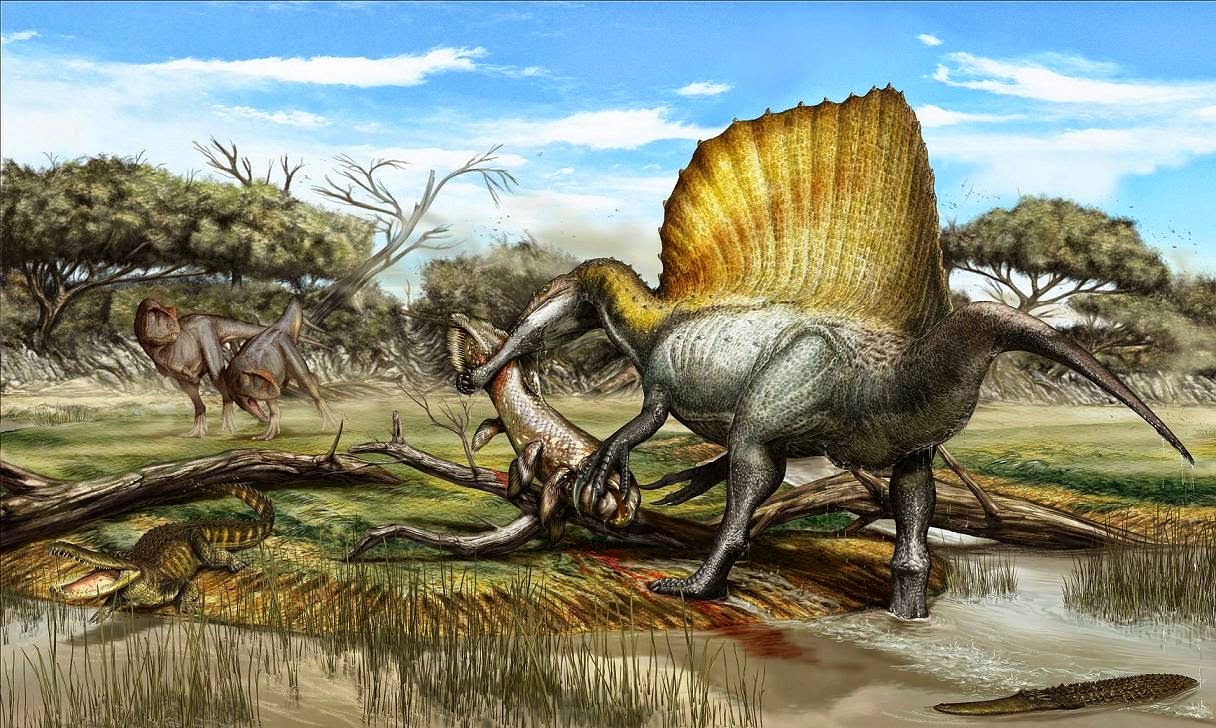 
Most jellyfish do not have specialized digestive, osmoregulatory, central nervous, respiratory, or circulatory systems. The manubrium is a stalk-like structure hanging down from the centre of the underside, with the mouth at its tip. This opens into the gastrovascular cavity, where digestion takes place and nutrients are absorbed. It is joined to the radial canals which extend to the margin of the bell.[19] Jellyfish do not need a respiratory system since their skin is thin enough that the body is oxygenated by diffusion. They have limited control over movement, but can use their hydrostatic skeleton to navigate through contraction-pulsations of the bell-like body; some species actively swim most of the time, while others are mostly passive.[citation needed] Depending on the species, the body contains between 95 and 98% water. Most of the umbrella mass is a gelatinous material — the jelly — called mesoglea which is surrounded by two layers of protective skin. The top layer is called the epidermis, and the inner layer is referred to as gastrodermis, which lines the gut.
​ Nervous system
Jellyfish employ a loose network of nerves, located in the epidermis, which is called a "nerve net". Although traditionally thought not to have a central nervous system, nerve net concentration and ganglion-like structures could be considered to constitute one in most species. A jellyfish detects various stimuli including the touch of other animals via this nerve net, which then transmits impulses both throughout the nerve net and around a circular nerve ring, through the rhopalial lappet, located at the rim of the jellyfish body, to other nerve cells.

Some species explicitly adapt to tidal flux. In Roscoe Bay, jellyfish ride the current at ebb tide until they hit a gravel bar, and then descend below the current. They remain in still waters until the tide rises, ascending and allowing it to sweep them back into the bay. They also actively avoid fresh water from mountain snowmelt, diving until they find enough salt
​ 
Some jellyfish have ocelli: light-sensitive organs that do not form images but which can detect light and are used to determine up from down, responding to sunlight shining on the water's surface. These are generally pigment spot ocelli, which have some cells (not all) pigmented.

Certain species of jellyfish, such as the box jellyfish, have been revealed to have more advanced vision than their counterparts. The box jellyfish has 24 eyes, two of which are capable of seeing color, and four parallel information processing areas or rhopalia that act in competition,[23] supposedly making it one of the few creatures to have a 360-degree view of its environment.[24]

The eyes are suspended on stalks with heavy crystals on one end, acting like a gyroscope to orient the eyes skyward. They look upward to navigate from roots in mangrove swamps to the open lagoon and back, watching for the mangrove canopy, where they feed​

The smallest jellyfish are the peculiar creeping jellyfish in the genera Staurocladia and Eleutheria, which have bell disks from 0.5 mm to a few mm diameter, with short tentacles that extend out beyond this, on which these tiny jellyfish crawl around on seaweed or the bottoms of rocky pools. Many of these tiny creeping jellyfish cannot be seen in the field without a hand lens or microscope; they can reproduce asexually by splitting in half (called fission). Other very small jellyfish, which have bells about one mm, are the hydromedusae of many species that have just been released from their parent polyps; some of these live only a few minutes before shedding their gametes in the plankton and then dying, while others will grow in the plankton for weeks or months. The hydromedusae Cladonema radiatum and Cladonema californicum are also very small, living for months, yet never growing beyond a few mm in bell height and diameter. Another small species of jellyfish is the Australian Irukandji, which is about the size of a fingernail.

The lion's mane jellyfish, Cyanea capillata, was long-cited as the largest jellyfish, and arguably the longest animal in the world, with fine, thread-like tentacles that may extend up to 36.5 metres (120 ft) long (though most are nowhere near that large).They have a moderately painful, but rarely fatal, sting. Claims that this jellyfish may be the longest animal in the world are likely exaggerated; some other planktonic cnidarians called siphonophores may typically be tens of meters long and seem a more legitimate candidate for longest animal.[citation needed]

The increasingly common giant Nomura's jellyfish, Nemopilema nomurai, found in some, but not all years in the waters of Japan, Korea and China in summer and autumn is probably a much better candidate for "largest jellyfish", since the largest Nomura's jellyfish in late autumn can reach 200 centimetres (79 in) in bell (body) diameter and about 200 kilograms (440 lb) in weight, with average specimens frequently reaching 90 centimetres (35 in) in bell diameter and about 150 kilograms (330 lb) in weight. The large bell mass of the giant Nomura's jellyfish[32] can dwarf a diver and is nearly always much greater than the up-to-100 centimetres (39 in) bell diameter Lion's Mane.[33]

The rarely encountered deep-sea jellyfish Stygiomedusa gigantea is another solid candidate for "largest jellyfish", with its thick, massive bell up to 100 centimetres (39 in) wide, and four thick, "strap-like" oral arms extending up to 6 metres (20 ft) in length,[34] very different from the typical fine, threadlike tentacles that rim the umbrella of more-typical-looking jellyfish, including the Lion's Mane. 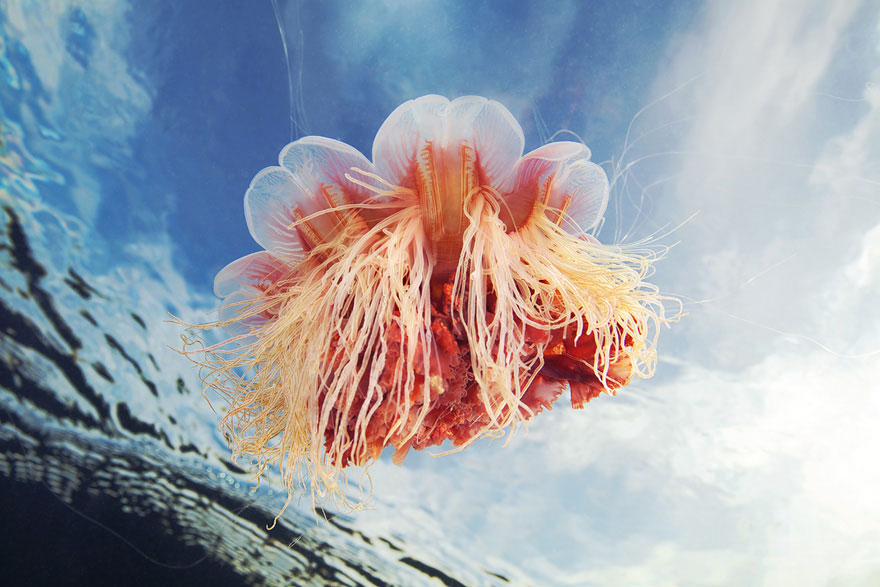